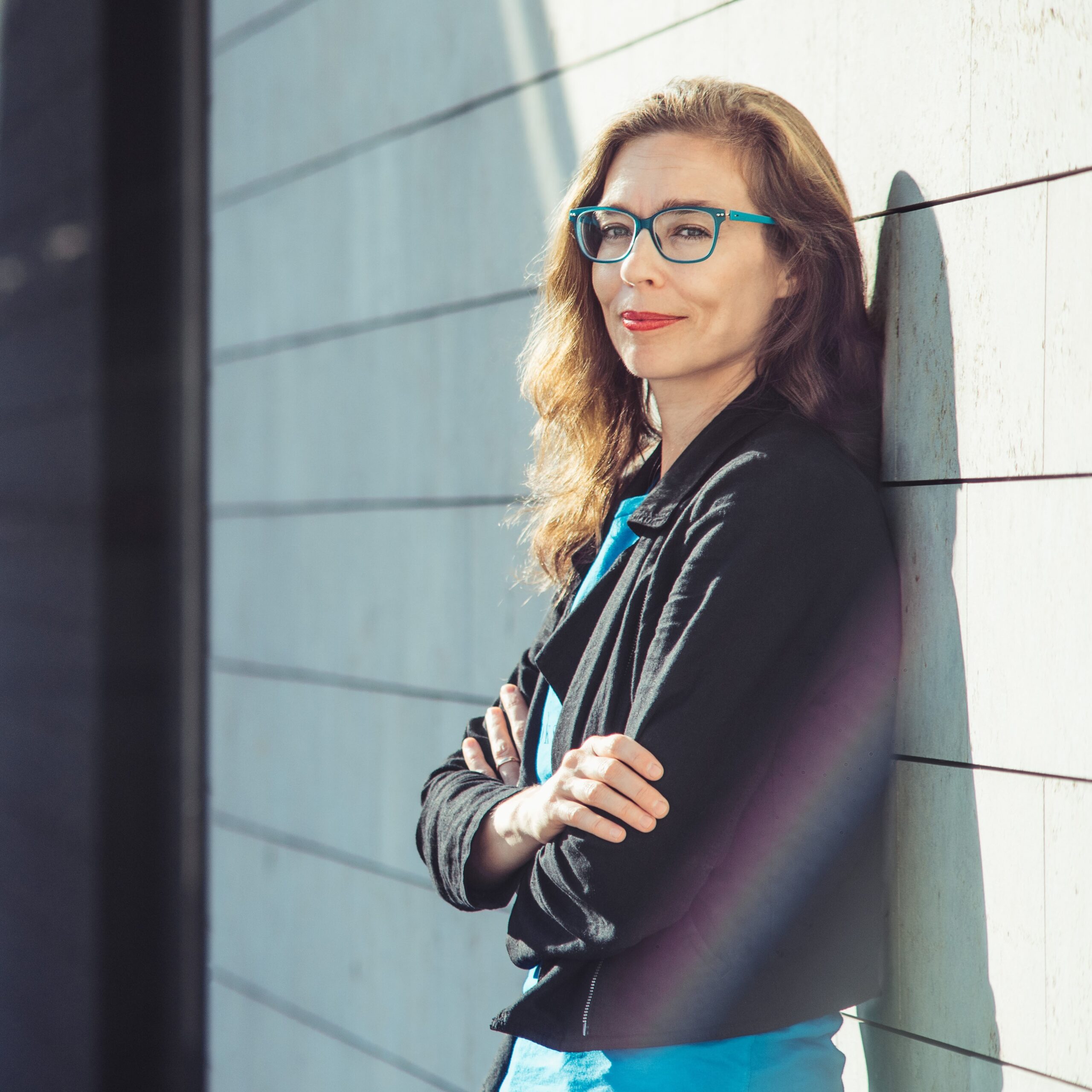 Žibuoklė’s music revolves around the subject of beauty as a guiding principle and an aesthetic measure for sonic quality. Seeking to revive this essential category and as a fight against our ever-shortening attention span, she created an hour-long audiovisual project In Search of Lost Beauty (2016) for piano trio, electronics and video projections. The reviewers noted that this piece is “a gorgeous, slowly-building suite that invites listeners to lose track of time… when the journey is over, one is stunned to realize that seventy minutes have passed” (A Closer Listen, 2019) and that “Martinaitytė’s imagination is most acute when focused on an extended timespan and broader aural canvas” (Gramophone magazine, April 2019). Well-known NYC radio host John Schaefer dedicated his entire show to this piece (New Sounds #4225)

Žibuoklė’s explorations of beauty, often found in sonorous layered textures of ever-present harmonic overtones, continued in Chiaroscuro Trilogy (2017) for piano and chamber orchestra, Chant des Voyelles (2018) for a capella choir commissioned by VOLTI, San Francisco, Millefleur (2018) for symphony orchestra and Sielunmaisema (2019) for cello and string orchestra. Her orchestral and large ensemble works were released on the solo CD Horizons by the Lithuanian Music Information Center in December, 2017. Covering the “Blue period”, which coincided with her move to the US and the death of her father, these pieces (especially Completely Embraced by the Beauty of Emptiness for large ensemble or The Blue of Distance for a cappella choir) comprise emotional dichotomies of tension and longing resulting from the identity based on cultural ambiguities. According to the musicologist Linas Paulauskis “the reappearing leitmotifs in Martinaitytė’s work are emptiness, loneliness, silence, tranquility, transience, longing, memories, distances… And these are never empty sentimental words – the existential anxiety and blissful sadness emanating from her music are what convinces.”(Lithuanian Music Link, 2019)

Three of her lavish orchestral opuses for philharmonic venues – A Thousand Doors To The World, Horizons and Millefleur received the Lithuanian Composers Union Award as Best Orchestral Performances for 2009, 2013 and 2018. A Thousand Doors To The World was commissioned by the Lithuanian Radio to celebrate Vilnius as the Culture Capital of Europe in 2009. The premiere was broadcast by the Euroradio – one of the “largest virtual concerts halls” with 4 million listeners.

Having started her creative career in Europe for the last decade, Žibuoklė’s activity has been rooted in the USA. In 2008 the MATA festival commissioned her to write the piece Polarities for the Knights Chamber Orchestra. She received commissions from the Barlow Endowment (2012), Look+Listen festival (2017), Volti (2018), a fellowship for the Other Minds festival (2011) and the New Works residency at Harvestworks, New York (2016). Her first USA orchestral performance of Horizons took place at the Composers Inc. concert in Berkeley, California (2015). In 2017 she was granted the Copland House Sylvia Goldstein award and the Composers Now award for residency at the Pocantico Center, NY. She received a number of fellowships for creative residencies at the MacDowell Colony (2009, 2011, 2019), Aaron Copland House (2010, 2019), Millay Colony (2012), The Blue Mountain Center (2015), Cité Internationale des Arts in Paris, France (2015), Djerassi Artists Residency (2017) and Willapa Bay residency (2018).

Žibuoklė is primarily active in the chamber and orchestral music genres. She favors unconventional blends of timbres, expressive virtuosity, intense utilization of extreme instrumental registers, which often stretch the maximum boundaries and technical capabilities of performers. In her scores exceptional roles are typically given to such instruments as tuba, trombone, accordion or bassoon. The composer extracts these instruments from the utmost ends of the orchestra and transforms them into a limelight of indispensable notability.

Martinaitytė’s instrumental techniques are exemplified by pieces such as – Salto Mortale (1993) for 2 contrabasses and organ, A Desert (1996) for 3 trombones, tuba, piano and bell. Later it is found in Between for trombone, trumpet and percussion performed in France in 2000 by members of the Nouvel Ensemble Moderne de Montreal and in Attention! High Tension! (2001) for tuba and piano which received more than 50 performances throughout Lithuania. Starting from 2004 as a result of her collaboration with Lithuanian accordionist Raimondas Sviackevičius, the accordion played a significant role in her music for the next few years. In 2004 “Gaida” contemporary music festival in Lithuania commissioned her to write Driving Force for trombone, tenor saxophone and accordion. In 2006 she was commissioned to write a concerto for accordion and a chamber orchestra called Breakthrough performed by R. Sviackevičius and The Lithuanian Chamber Orchestra. This led to an even more interesting event where conductor Daniel Gazon (Belgium) proposed a commission to write a piece for 6 accordions, 5 saxophones, wind orchestra, percussion, piano and strings called Perpetual Pulsing Transience (performed in Brussels, Belgium by the Orchestra of Royal Conservatory of Mons and published by Musikproduktion Höflich, Germany). Some of her chamber works reflect the aesthetics of the high-tension period – Unique Forms of Continuity in Space (2017) for 2 pianos and 2 percussionists, Gridlock (2013) for clarinet, cello and piano; American Hodgepodge (2011) for ensemble and electronics, and Osmosis (2015) for brass sextet.

In addition to writing for acoustic instruments, Martinaitytė has been developing an ongoing interest in electronic music. Since 1998 when she composed the piece Being without for cello, percussion and live electronics, she has been returning to this expanded palette. Her chamber opera based on Hermann Hesse’s Steppenwolf composed from 1995-2003 also uses an electronic tape part accompanying chamber orchestra and singers. Combining her love for brass instruments with an electronic medium, she created Ab Initio (2004) for tuba and tape, which consisted entirely of bird sounds. Among her other electronic pieces performed at the electronic music festival “Jauna Muzika” in Lithuania are The Unknown (2005) for soprano, flute, live electronics and tape, Illusions of Time and Space (2006) for string quartet and electronics and Continuity-Discontinuity (11:11-11:22) (2008) for 4 bassoons and tape. Her collaborations with electronic music composer True Rosaschi resulted in 2 projects: 1+1=∞ (2011) for 2 cellos, piano, live electronics and audio cubes and an immersive audiovisual installation Vanishing Lands (M-Islands) (2016) for spatialized sound (10 speakers) and 2 video projections. The latter is based on the notion of disappearing places in the world due to global warming and rising sea levels.