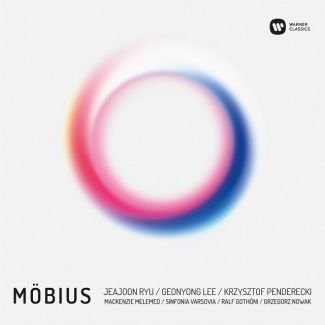 “7800 km apart, connected by culture” – the 30th anniversary of establishing diplomatic relations between Poland and the Republic of Korea is commemorated by a unique album that documents the musical cooperation between the two countries. MÖBIUS, the strip, stretches across geographic, stylistic and temporal borders to show how compositions by Krzysztof Penderecki, Jeajoon Ryu and Geonyong Lee blend together.

It all began with August Ferdinand Möbius, mathematician and astronomer who was the first person to describe the properties of the strip later named after him. A one-dimensional loop became the starting point of a discussion about two seemingly distant musical cultures – those of Poland and of South Korea. Sinfonia Varsovia’s visits to Korea and joint concerts with Korea artists in concert halls around the world contribute to the transfer of musical ideas, values, experience and mutual inspiration. Solid bridges between the two cultures have certainly already been built and regular meetings resulted in the recording of Möbius.

The album contains works by Krzysztof Penderecki, Jeajoon Ryu and Geonyong Lee. The record came to be in a time of many anniversaries. The year 2019 is not only Sinfonia Varsovia’s 35th anniversary, but also the 30th anniversary of establishing diplomatic relations between Poland and the Republic of Korea. The album commemorates these dates and sets out new perspectives of contemporary music. The recording features eminent conductors and soloists: Mackenzie Melemed (piano), Ralf Gothóni (conductor) and Grzegorz Nowak (conductor).

One of the first persons to initiate the Polish-Korean exchange was Krzysztof Penderecki, artistic director of Sinfonia Varsovia, renowned composer, creator of innovative sonic concepts. His oeuvre sets out a point where both cultures meet – in 1992 the composer was commissioned by the Cultural Society of Korea to compose his Symphony No. 5. The work showcases Penderecki’s mature, neo-romantic style, combining elements of battle and heroism with contemplation and triumph. It brings to mind associations with other well-known symphonies – Beethoven’s Fifth and Shostakovich’s Fifth. It was already then that Penderecki’s works, marked deeply by humanist thought, inspired younger composers, influencing their musical language, also beyond the borders of Europe.

The inter-continental flow continues with Jeajoon Ryu, a student of Penderecki, whose music successfully combines the South-Korean idiom with European tradition. It is the admiration of the Maestro’s music, as well as that of other Polish composers – Witold Lutosławski and Henryk Mikołaj Górecki – convinced the Korean composer to come to Cracow to study music. It was in Poland that Ryu’s Piano Concerto received its first performance – the work is clearly influenced by Penderecki’s Fifth Symphony. The work, with a prominent winds section refers to old forms and to the major-minor system, as does the original work that inspired the younger artist.

The circle of Polish-Korean musical thought closes with Geonyong Lee, a South-Korean composer of the generation preceding Ryu. After graduating in Seoul, he also arrived in Europe to continue his education. His Gyol is a bridge of sorts between Penderecki’s work and the composition of his fellow countryman – on one hand it draws on the works of the sonoristic composers, and on the other he filters the music through the traditions of his homeland. One sees similarities in Lee’s work to György Ligeti, one of the major composers of the 20th century.

The recording of the album was made possible thanks to cooperation with the Adam Mickiewicz Institute, which developed a special cultural programme on the occasion of the 30th anniversary of establishing Polish-Korean diplomatic relations bearing the motto “7800 km apart, connected by culture”, and also thanks to Arts Council Korea, Ilshin Foundation and the Seoul International Music Festival.

The album will be released worldwide on 25 October.