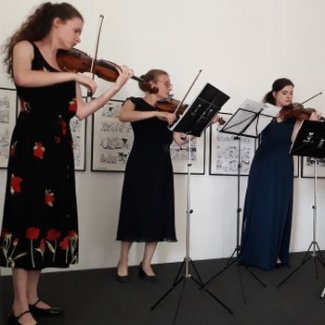 Three violinists, participants of the Sinfonia Varsovia Academy and Anna Maria Staśkiewicz – their mentor and concert master of our Orchestra, took part in the Musethica workshops, held in Berlin on 24–29 June 2019.

Musethica is an educational programme for noteworthy young musicians. It has been held for the past 7 years in 10 countries around the world. Its artistic director and co-founder is the well-known Israeli-born viola player Avri Levitan.

The idea of the programme is to enable youth undergoing a musical education to establish contact with the public through a series of performances (usually 2-3 concerts each day), preceded by intensive rehearsals with the mentor. Young artists experience the enormous impact of live music. The education process – a development of awareness to what other members of the ensemble are playing, adjusting an interpretation to listeners’ reactions during a performance – take place spontaneously and more quickly than it would ever have from verbal instruction.

What’s important, Musethica participants most often perform before very specific audiences that are not typical concert hall visitors: pre-school and school students, prisoners, psychiatric ward patients, the socially excluded. Prejudice, a judgmental attitude are foreign to these audiences. On the contrary, they often react in a spontaneous, honest manner, providing the performers with natural feedback.

This time, Anna Maria Staśkiewicz, Karolina Gutowska, Emilia Jarocka and Katarzyna Denkiewicz-Stawujak played concerts in a shelter for the homeless, a women’s prison, a youth detention centre, three different psychiatric wards, an international pre-school, a women’s shelter, an AA café and in a bar which usually holds jazz concerts. The final performance took place at the Polish institute in Berlin. In the course of six days of the Musethica workshops, the musicians played 14 concerts. The concert programmes included Polish music – works by Witold Lutosławski and Grażyna Bacewicz. The latter’s works linked with the 50th anniversary of the composer’s death this year.

Usually, the Musethica programme is realised together with music schools. Participating students must prove top-level playing skills to obtain a recommendation from the Musethica artistic committee. This was the first time that participants of the Orchestra Academy have been invited to take part in the programme, based on the conviction of high requirements for prospective participants of the Sinfonia Varsovia Academy. Joint performances with an experienced artist-mentor, contact with unusual audiences, no distance between the stage and the audience and spirited, candid reactions of the listeners enabled the workshop participants to develop and strengthen interpersonal competencies and musical co-operation skills – crucial attributes of the orchestral musician.