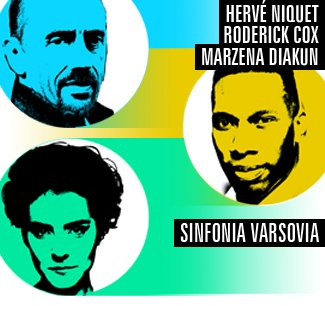 It was 35 years ago that one of the most famous violinists of the 20th century – Yehudi Menuhin – visited Poland for the first time. His visit inspired the formation of the Sinfonia Varsovia Orchestra, currently considered to be one of the best orchestras in Poland. To celebrate its anniversary, please join Sinfonia Varsovia in Teatr Wielki – the National Opera in a festive birthday concert on 23 March. The orchestra’s musicians will be directed by no fewer than three conductors and the evening’s programme consists of works associated with Orchestra’s splendid history.

In the 35 years of its existence, Sinfonia Varsovia played nearly 4 000 concerts all over the world. The Orchestra’s discography boasts more than 300 releases. Sinfonia Varsovia works together with the greatest soloists and conductors in the world. For more than ten years, as a city cultural institution, it has also been involved in extensive educational and community activity in its home at 272 Grochowska Street. The repertoire of the concert on the occasion of the ensemble’s 35th anniversary of its formation relates to the most important persons and events in Sinfonia Varsovia’s history.

The concert opens with Sinfonietta per archi, composed by Krzysztof Penderecki, Sinfonia Varsovia’s artistic director. The work bears a special dedication to the Orchestra. Its inclusion in the evening’s programme is a reference to the Polish Chamber Orchestra, which was the cornerstone to Sinfonia Varsovia’s formation. Next in the programme is the overture to Gioacchino Rossini’s L’Italiana in Algeri – a work the ensemble performed many times under Menuhin’s direction. Directing this work will be French harpsichordist and conductor Hervé Niquet, who will also conduct the work to follow – Paul Dukas’ The Sorcerer’s Apprentice. French music and cooperation with French artists occupies a significant position in the Orchestra’s repertoire. Sinfonia Varsovia has been a continuous presence at major music festivals in France, including La Folle Journée and the La Roque d’Anthéron Piano Festival for more than 20 years.

After the intermission, young American conductor Roderick Cox will take up the podium. Cox is last year’s laureate of the prestigious Sir Georg Solti Conducting Award, awarded by the American Solti Foundation. Cox will conduct classic works of American music – 2nd Essay for Orchestra Op. 17 by Samuel Barber and Symphonic Dances from Leonard Bernstein’s musical West Side Story. Then, we will hear Serge Prokofiev’s Symphony No. 1 Op. 25 in D major “Classical”. One of Sinfonia Varsovia’s favourite works, it will be conducted by the much respected Marzena Diakun, laureate of, among others, the Polityka weekly’s Passport award. She will also direct the last work in the programme of the concert – Wojciech Kilar’s Krzesany.

The concert will be hosted by two persons with exceptionally strong ties to the Orchestra. The first is Waldemar Dąbrowski, director of Teatr Wielki – the National Opera. It was at his invitation that Yehudi Menuhin visited Poland for the first time. The other is Janusz Marynowski, the Orchestra’s veteran double bassist and director of the Orchestra for the past 15 years. Their stories will acquaint the audience with Sinfonia Varsovia’s colourful history and provide a glimpse of the ensemble’s future plans. During the intermissions it will be possible to look at archival photographs of the Orchestra and illustrations and a mock-up of Sinfonia Varsovia’s new home, including Poland’s largest concert hall.

Tickets to the concert are priced 30 – 110 PLN and are available at old.teatrwielki.pl/bilety and at eventim.pl