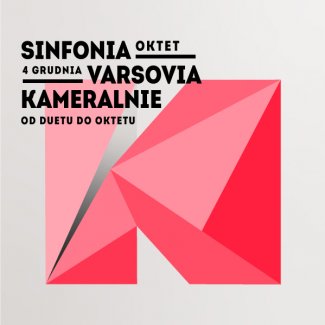 The cycle of encounters with chamber music at Grochowska Street is drawing to a close. Following the path “From Duet to Octet”, the last concert of the year in the Sinfonia Varsovia Chamber Music series will be devoted to octets – music written for an ensemble of eight musicians. We will have an opportunity to hear two works, both brimming with youthful energy and original ideas to combine the sounds of string instruments. Compositions by Mendelssohn and Shostakovich will be performed by musicians of the Sinfonia Varsovia Orchestra.

The December event concludes this year’s cycle of chamber music concerts in the Orchestra’s home. The second Sinfonia Varsovia Chamber Music cycle, titled From Duet to Octet let us take a closer look at works from various periods, written for ensemble of two to eight musicians. The increasing number of performers each month enabled listeners to become familiar with the art of musical conversation from many angles, showing the beauty and intimacy of interaction between the instruments. The last concert, featuring an Octet, will be no different. The ensemble will consist of Jakub Haufa (violin), Artur Gadzała (violin), Łukasz Turcza (violin), Dominika Haufa (violin), Katarzyna Budnik (viola), Tomasz Rosiński (viola), Katarzyna Drzewiecka (cello), Kamil Mysiński (cello) and will perform works by Mendelssohn and Shostakovich.

Composers use various strategies to choose instruments for an octet – some achieve the sound of a small orchestra, others double a string or wind quartet. This latter strategy was adopted by Felix Mendelssohn-Bartholdy in his Octet in E-flat major, Op. 20 (1825). The Octet is considered to be one of the best works of Romantic chamber music and was written by the German composer in his youth. It consists of four contrasting movements, of which the third (Scherzo) is perceived as a stroke of genius. Inspired by Walpurgisnacht from Goethe’s “Faust”, the movement sparkles with colour, seducing the listener with its delicacy and grace. Some have even given a name to this original style: elfenromantik. The Octet in E-flat major foreshadows another brilliant work in Mendelssohn’s output – the Overture to “A Midsummer Night’s Dream”.

The second composition to be performed that evening – Two Pieces for String Octet, Op. 11 is altogether different. Even though the Prelude in D minor and Scherzo in G minor Op. 11 (1924–1925) were also written by the composer in his youth,, they emanate with a wild energy and dramatic expression. Shostakovich begins the Prelude with a reference to the French Baroque. Only in the Scherzo, which provides a clear counter-balance to the first part of the work, does the composer allow modernist means of expression to come to the fore – rough-hewn dissonance, rapid tempi with a touch of lyricism that made the composer famous.

The second edition of the Sinfonia Varsovia Chamber Music series is more than just concerts in the Orchestra’s home at 272 Grochowska Str. They also include similar events in various locations around Warsaw. Anyone, who will not be able to attend the concert on 4 December will have an opportunity to listen to the same works one day later, on 5 December at 7:00 p.m. (Sinfonia Varsovia Chamber Music – Within Reach) on the stage of the ŁOWICKA Centre for Culture at 21 Łowicka Str. in the Mokotów district of Warsaw.

Admission to both concerts is free.