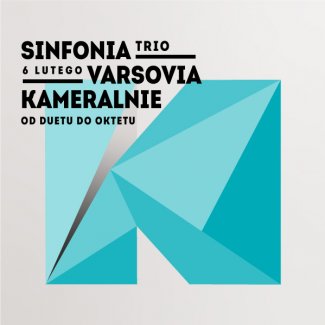 Music of both Americas – North and South comprises the programme of the second concert in the Sinfonia Varsovia Chamber Music series. The theme of the cycle that began in January is “From Duet to Octet”. Thus, in February we will have an opportunity to listen to a trio consisting of Sinfonia Varsovia musicians Celina Kotz (violin) and Jakub Waszczeniuk (trumpet) with a guest appearance by pianist Piotr Spoz.

Even though the classical trio is most often associated with a violin, cello and piano, other combinations of three musicians are encountered from time to time. At the second in the Sinfonia Varsovia Chamber Music series, we will have an opportunity to hear music for violin, trumpet and piano.

The programme of the concert on 6 February at 7:00 p.m. will consist of two works written for this combination of instruments by American composers. The first – the Trio for Trumpet, Violin and Piano was composed by Eric Ewazen in 1992. Critics praised the work for its lively rhythm and outstanding use of instrumental colour, with the composer retaining many elements typical to the American musical tradition, reaching back to the times of colonial folk songs.

Similar influences are evident in James Stephenson’s Trio Sonata for violin, trumpet and piano. The three-movement work was written in 2001. It abounds in lyrical melodies and graceful harmonies. Subtitled “Devil’s Mischief”, the last movement breaks away from this mood, reflecting the composer’s desire to spice up the music, and is descriptive of the hellish piano part.

The last work of the evening awakens very different emotions. Arranged for violin, trumpet and piano, Astor Piazzolla’s famous Oblivion retains the nostalgic character of the Argentine tango, but infuses the music with new shades of colour.

The second edition of the Sinfonia Varsovia Chamber Music cycle goes beyond concerts in the Orchestra’s home at 272 Grochowska Street, replicating identical events in various locations around Warsaw. Anyone not able to attend the concert on 6 February will have an opportunity to hear the music again some days later, on 11 February at 7:00 p.m., on the stage of the Służew Centre of Culture.

Admission to the concert in the Orchestra’s home and in the Służew Centre of Culture is free.