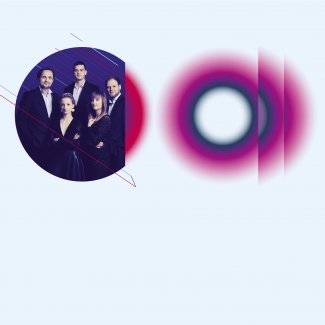 Sinfonia Varsovia is extending its concert activities to include new contemporary music projects. Two events will take place in Nowy Teatr in December, during which the musicians will appear in a chamber music setting – the Sinfonia Varsovia String Quintet, as well as in full symphonic force. The concerts will showcase hitherto rarely performed repertoire by Polish contemporary composer Adam Falkiewicz, whose music will be confronted with renowned works by the greatest composers of the 20th and 21st century, including Witold Lutosławski and Krzysztof Penderecki.

The first concert, titled Orpheus among Shades (13.12, 7:00 p.m.) will highlight the wealth of Polish contemporary music hidden in its diversity of colour, abundance of musical contexts and references to musical tradition. The repertoire performed by the Sinfonia Varsovia String Quintet includes lesser-known transcriptions of chamber works, made by the composers themselves. These are the Quintetto per archi, composed by Sinfonia Varsovia’s artistic director Krzysztof Penderecki and Five Folk Songs – a cycle of miniatures composed by Witold Lutosławski. Apart from their dual musical existence, the thread that binds the two works is inspiration drawn from folk music that manifests itself in quotes from folk melodies.

Apart from works by foremost representatives of the “Polish Composing School”, the concert programmes take a fresh look at sound explorations by composers of younger generations: Andrzej Kwieciński and Roxanna Panufnik: the former’s spectral Umbrae and Votive, written by the daughter of Andrzej Panufnik especially for the Sinfonia Varsovia String Quintet, a work referring to the Sephardic music tradition.

A meeting with the artists is planned after the concert to promote the release of Sinfonia Varsovia String Quintet’s debut recording. The Quintet is the second chamber ensemble made up of the Orchestra’s musicians, following in the footsteps of Sinfonia Varsovia Brass. The ensemble was formed in 2015 and consists of a rare combination of two violins, viola, cello and double bass, the members being concertmasters and principals of Sinfonia Varsovia’s string sections – Anna Maria Staśkiewicz (1st violin), Kamil Staniczek (2nd violin), Katarzyna Budnik (viola), Marcel Markowski (cello) and Michał Sobuś (double bass). During the concert, the Anna Maria Staśkiewicz will be replaced by Adam Siebers.

The meeting with the musicians will be hosted by Polish Radio Programme 2 personality Ewa Szczecińska.Textures in Resounds (14.12, 6:00 p.m.) forms part of Sinfonia Varsovia’s regular Resounds. New Polish Music concert cycle. Programmes of concerts focus on the topic of musical texture in works written by contemporary Polish composers. The cycle is organised jointly by the Sinfonia Varsovia Orchestra and Nowy Teatr. That evening, the ensemble will be joined by excellent young generation trumpet player Jan Harasimowicz, who is closely associated with the Orchestra. The concert will be conducted by Lebanese-Polish conductor Bassem Akiki.

The programme features works stylistically and texturally diverse: Paweł Szymański’s Partita IV, Krzysztof Penderecki’s Concertino for trumpet and orchestra, Tomasz Sikorski’s “Holzwege”, as well as other works that are rarely present in concert programmes, such as Adam Falkiewicz’s “Wind and Counterpoint Seven”.