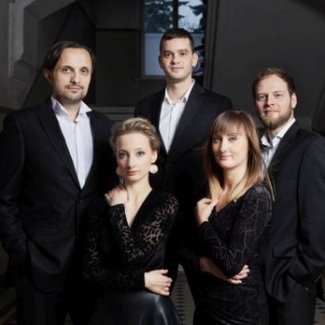 The Sinfonia Varsovia String Quintet is releasing its first recording – featuring contemporary music. The album will be released on 6 December! We will have an opportunity to hear the ensemble perform most of the works on the new album on 13 December in Nowy Teatr in a concert titled “Orpheus Among Shades”. Apart from music by Krzysztof Penderecki and Witold Lutosławski, there will also be compositions by Jan Duszyński and Andrzej Kwieciński.

The concert “Orpheus Among Shades” (13.12, 7:00 p.m.) in Nowy Teatr will let the Sinfonia Varsovia String Quintet showcase the many dimensions of Polish contemporary music in an intimate, chamber setting. This time around, the musicians will perform lesser-known transcriptions of chamber music including the Quintetto per archi, written by Sinfonia Varsovia’s Artistic Director Krzysztof Penderecki and “Five Folk Songs” ­– a cycle of miniatures composed by Witold Lutosławski. Apart from their dual musical existence, the thread that binds the two works is inspiration drawn from folk music that manifests itself in quotes from folk melodies.

Quintetto per archi abounds with musical reminiscences of initial musical experiences of the young Krzysztof Penderecki. The work recalls phrases of a Hutsul melody played on the violin by his father. On the other hand “Five Folk Songs” is often considered to be a work that opens a new folk-inspired period in Witold Lutosławski’s extensive oeuvre.

Apart from works by foremost representatives of the “Polish Composing School”, the concert programme also features pieces written by composers active in the 21st century: Andrzej Kwieciński, Roxanna Panufnik and Jan Duszyński. The spectral “Umbrae” was written by Andrzej Kwieciński – a composer who uses idioms of the avant-garde to build a repertoire of musical gestures similar to those of the Baroque. Quoting the artist: “(…) My music is like a painting. “Umbrae” is dark, full of shadows (…)”. Shadows in terms of colour are also present “Votive”, written by the daughter of Andrzej Panufnik. The work refers to the Sephardic music tradition and was written especially for the Sinfonia Varsovia String Quintet. The programme also String Quintet No. 2 written by Jan Duszyński – a composer who mostly writes music for the theatre and film.

The Sinfonia Varsovia String Quintet was formed in 2015 and is the second chamber ensemble made up of the Orchestra’s musicians, following in the footsteps of Sinfonia Varsovia Brass. The Quintet consists of concertmasters and principals of Sinfonia Varsovia’s string sections – Anna Maria Staśkiewicz (1st violin), Kamil Staniczek (2nd violin), Katarzyna Budnik (viola), Marcel Markowski (cello) and Michał Sobuś (double bass). During the concert, Anna Maria Staśkiewicz will be replaced by the Orchestra’s 2nd concertmaster Adam Siebers.

A meeting with the artists is planned after the concert to promote the release of Sinfonia Varsovia String Quintet’s debut recording, coinciding with the Sinfonia Varsovia Orchestra’s 35th anniversary. The record is released by Warner Music Polska and highlights the virtuoso skills of the musicians in the luxuriant repertoire of contemporary music. The album also includes the brilliant 8th String Quartet Op. 110 by Dmitri Shostakovich. All the works on the album show many types of musical expression and all are universally connected by a wealth of references to musical and native folk tradition.

The meeting with the musicians after the concert will be hosted by Polish Radio Programme 2 personality Ewa Szczecińska.