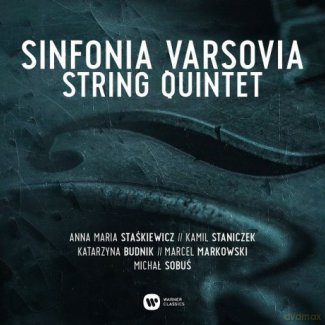 Chamber music, rich in colours, expression and creative references. Written in the 20th and 21st centuries, these works share an intimate aura and emotional statements that engage in dialogue with musical traditions. Virtuoso parts and diverse sounds. Sinfonia Varsovia String Quintet’s debut recording release enchants the listener with a game of musical contexts and sheen of masterful interpretation. The album will be available on 6 December.

The works on the album show many types of musical expression. All are related through a wealth of references to the common musical and native folk traditions. The release contains less-common transcriptions of chamber music, including the Quintetto per archi, written by Sinfonia Varsovia’s Artistic Director Krzysztof Penderecki and Five Folk Songs – a cycle of miniatures composed by Witold Lutosławski. Apart from their dual musical existence, the thread that binds the two works is inspiration drawn from folk music that manifests itself in quotes from folk melodies.

Chamber music stimulates composers to make personal, highly emotional statements. Auto-biographical references are a good example of these, such as in Dmitri Shostakovich’s String Quartet No. 8 in C minor, in which the composer quotes his own, earlier works and “signs” it with his personal musical initials of D-Es-C-H. The meditative Votive was written by Roxanna Panufnik, the daughter of Andrzej Panufnik. The work is dedicated to Pamela Majaro – a deceased pianist of Welsh origin. The composition refers to the Sephardic music tradition and the version for string quintet was written especially for the Sinfonia Varsovia String Quintet.

The Sinfonia Varsovia String Quintet was formed in 2015 and consists of a rare combination of two violins, viola, cello and double bass, which enables the ensemble to not only achieve an unprecedented profoundness of sound, but also allows each musician to showcase his virtuosity. The Quintet consists of concertmasters and principals of Sinfonia Varsovia’s string sections – Anna Maria Staśkiewicz (1st violin), Kamil Staniczek (2nd violin), Katarzyna Budnik (viola), Marcel Markowski (cello) and Michał Sobuś (double bass).

A meeting with the musicians after the “Orpheus Among Shades” concert will take place on 13 December and will be hosted by Polish Radio Programme 2 personality Ewa Szczecińska.

Listen to the album
https://wmg.lnk.to/wnkUs