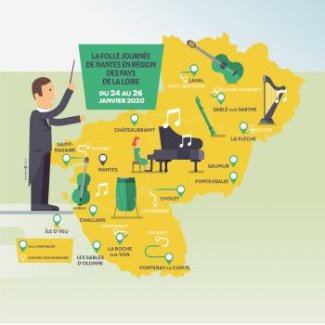 From Metz to the Pays de la Loire to the historic capital of Brittany – this is the itinerary of Sinfonia Varsovia’s French concert tour. The orchestra will perform at Musical City-Metz, promoting Polish music, and at the La Folle Journée Festival, devoted this year to the great Ludwig van Beethoven. In more than 20 concerts taking place from 22 January to 2 February, the orchestra will accompany renowned artists, including François-Frédéric Guy, Boris Berezovsky, Alexandre Kantorow, Alexander Kniazev and many others.

The first concert of the French tour takes place on 22 January. The Musical City-Metz projects, which this year devotes 10 days to Polish music, Sinfonia Varsovia – the only Polish symphony orchestra in the programme – will promote Polish classical music for French audiences, performing, among others, the Sinfonietta per archi. Written by Krzysztof Penderecki, Sinfonia Varsovia’s artistic director, the work was composed especially for the ensemble. Other works include Fryderyk Chopin’s Piano Concerto no. 2 in F minor Op. 21 and Ludwig van Beethoven’s Symphony No. 4 in B-flat major Op. 60. The conductor and soloist will be François-Frédéric Guy.

The Orchestra will then travel to cities in the Pays de la Loire region to take part in La Folle Journée de Nantes en Région – an event that precedes the main La Folle Journée Festival, taking place on 24–26 January. This year , on the occasion of Ludwig van Beethoven’s 250th birthday, festival events will focus on the works and life of the last of the Viennese classics, who was also a precursor of the Romantic period in music. Once again, Sinfonia Varsovia will be accompanied by a great interpreter of Beethoven’s music François-Frédéric Guy, performing the Piano Concerto No. 5 in E-flat major Op. 73 “Emperor”, which the artists recorded last year on the album Beethoven Intégrale des Concertos pour Piano (Festival Printemps des Arts de Monte-Carlo, 2019). The Orchestra’s musicians will also appear in a chamber setting, performing bagatelles from Op. 126 and 191 and the Piano Concerto No. 4 in G major Op. 58 transcribed for piano and string quintet. The soloist this time will be French pianist Anne Queffélec.

The last stop of the concert tour is Nantes. During the 26th edition of the La Folle Journée Festival (29 January to 2 February), Sinfonia Varsovia will play a wide variety of music written by Beethoven, including symphonies, piano concertos, as well as instrumental miniatures and vocal works. One day before the Festival actually starts, listeners will have an opportunity to hear the sole symphony written by Beethoven with a programme: the rustic paint-like Symphony No. 6 in F major Op. 68 “Pastoral”. The Festival’s closing concerts feature chamber and vocal music, including the Elegischer Gesang Op. 118, the Cantata on the Death of Emperor Joseph II WoO 87 and the cantata Meeresstille und glückliche Fahrt Op. 112, performed by the Orchestra with the Ensemble Aedes choir. Sinfonia Varsovia will perform with famous pianists, including Alexandre Kantorow, Boris Berezovsky and Mao Fujita, violinists Nikita Boriso-Glebsky, Diana Tishchenko and Liya Petrova and Russian cellist Alexander Kniazev. The Orchestra will be conducted by Nodoka Okisawa, last year’s winner of the 56th Young Conductors’ Competition in Besançon, and also Lio Kuokman and Mihhail Gerts.

La Folle Journée is an international festival founded in 1995 by René Martin, promoter of classical music concerts and festivals around the world and founder of Centre de Realisations et d’Etudes Artistiques à Nantes (C.R.E.A.). The Festival is held each year in France, Japan, Poland and recently also in Russia. The idea of La Folle Journée is to popularise classical music among the widest possible range of listeners. Concerts take place in several locations simultaneously all throughout the day. Low ticket prices and a varied programme attract throngs of listeners. The event enjoys immense popularity around the world. The theme of this year’s, 26th edition is “Beethoven”. The Polish edition of the Festival takes place on the last weekend of September.